What is a Gaming Computer? – Broken Down For You 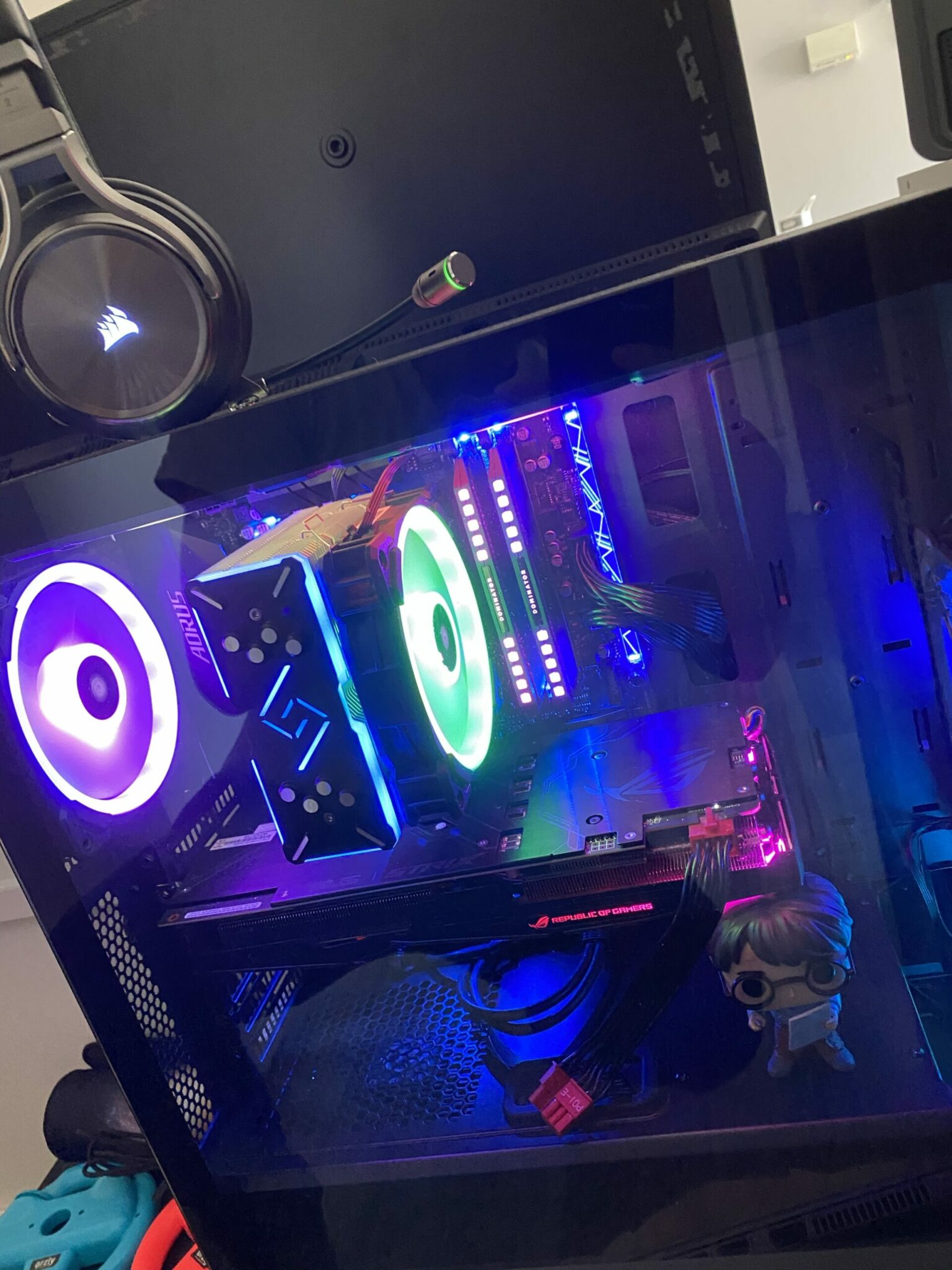 Just a quick post to help you understand the difference between your regular workstation or desktop computer and a gaming PC, along with a breakdown of the different components required to build up both types of computers. There will also be a comparison between gaming PCs and the different consoles that are available to purchase.

Difference Between a Regular Computer and Gaming Computer 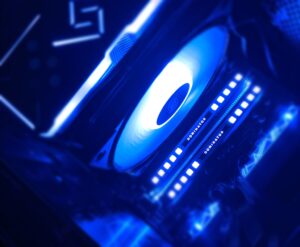 The main difference between these is that a gaming computer has usually been custom build for the sole purpose of having the increased performance to be able to run all the new titles. You will find numerous differences between them as they have to perform completely different tasks. For example, a regular computer would use an onboard graphics controller, where you’re gaming computer would use an additional graphics/video card. The graphics card would have its own dedicated ram/memory, GPU, and cooling system. Another difference that would come across is the amount of ram, memory installed. Your workstation would probably be running on 2GB to 8GB depending on the spec of your computer, with a gaming computer depending on the motherboard installed you can have upwards of 64GB. The last main difference that you would come across is the CPU, there are hundreds of different choices of CPU that you can use in either computer depending on the task that you want to complete on it.

Build or Buy a Computer

When it comes to buying a computer you have two options, you can either buy all the components and assemble it yourself or you can buy a prebuilt one. If you just want a regular computer then it would be cheaper to buy one that is prebuilt than to build yourself as they are all made the same and in bulk, whereas if you wanted a gaming PC it would be more cost-effective to buy the components and build it yourself as you wouldn’t be paying for someone’s time to do it for you. You don’t have to be completely tech-savvy to build your own as long as you have basic knowledge, make sure you do your research to understand where everything goes and understand what order to do it all on. If you do decide to go down the route of building your own one you would also need to make sure that all of your components are compatible, for instance, different CPUs have different sockets so you would have to keep this in mind when you’re ordering your motherboard, but you will also have to be careful what case you order as you can get different size motherboards. As you do your research you shouldn’t come into any of these issues.

There are many components required to build a computer, all just as important as the other because without them it wouldn’t work at all. You have a massive choice of brand when choosing any component which I will also mention below. The first component is the motherboard, this is the main circuit board that everyone plugs into. Depending on what CPU that you chose you will have a limited selection of board that you can buy, but the first thing you want to look at is what size board you want. You have full-sized XL-ATX, E-ATX, ATX which are mainly for high storage, and higher graphics as they have more slots available.

The next choice you have to make is what CPU you want to use, this is because depending on what brand and model you choose they may have different sockets, for instance, the AMD FX8350 is an older generation Ryzen that requires an AM3 socket, but the newer 1st and 2nd generation Ryzen requires an AM4 motherboard. With Intel, if you choose a Coffe Lake or Kerby Lake CPU these both use LGA1151 but the former would use a 300 chipset while the latter was released with a 200 chipset.

You are going to need to choose what CPU you want to use (Central Processing Unit). As previously discussed the brand will be decided now or depending on what motherboard you have decided to go for, you will either be going for Intel or Ryzen. When choosing the correct CPU you will need to take into account your budget, what you are willing to spend, and also what you are going to be doing on the PC. For example, the Intel Pentium or Celeron, as well as the AMD Athlon, are the basic chips that you would have in your day to day computers, then you would move up to Intel I5 alongside Ryzen 1 series and 2nd series for gaming to the top end where you get Intel X and Ryzen Threadripper but these would be for tasks such as video production or 3D modeling

The next component I want to talk about is GPU (graphics card), Some CPUs have onboard graphics which means you will be able to carry out your standard tasks on a regular computer but when you get into gaming and running more demanding tasks you will require a dedicated GPU. For example, if you were happy with 1080p gaming you would get away with something along the lines of a Nividia GeForce GTX 1660Ti or GTX 1660 if you wanted to go down the AMD route you could go for Radeon RX Vega 64 or 54. If you wanted to go next level and try 4K gaming you would have to go for something with a lot more power like the Nividia GeForce 2080Ti or GTX 2080, again you could go with AMD’s option of the Radeon VII.

When it comes to ram, also known as the memory it is more the merrier, with your standard computer it will most likely be running between 4GB and 8GB of ram depending on the spec of the computer. When it comes to the more demanding tasks you are going to want to have 16GB plus as it means it will manage more tasks and a lot faster than if you only have 4GB. You will also need to keep an eye on the speed of the ram, this is because to get the most out of the newer Ryzen chips it is recommended that you go for 3000mhz plus.

Once you have got this far you are going to need to make sure that you have a PSU (Power Supply Unit) that will have enough power to be able to run all the components without an issue because if it is underpowered it will cut out. Along with this, you will need to make sure it has the relevant connectors for the motherboard and graphics card. The bigger output you buy would be the better as you wouldn’t have to worry about upgrading again as you would have it covered, also you wouldn’t have to worry about the connectors as they would be included

We have covered all the essentials that are required for a computer, there are a few things that you might want to get on top of this. You are going to need some fans to make sure the case is well ventilated or you may cause it to overheat. You can get numerous sizes but the main two would be 120mm and 140mm, most cases are able to take both of these. There is also a huge choice of brands and colours available to match whatever build you want to create.

The argument between PC and consoles isn’t new, but there is no denying that the likes of the PS4 and Xbox one are as close to the PC as ever. Any console you purchase will always be better value for money, however, they will never be able to compete with the performance given out by a high-end gaming PC. Take a look at the price of the PS$ and Xbox One when the PS4 Slim and Xbox One S came out, you can pick up a reasonable bundle for around £200-£300 which is considerably cheaper than a gaming PC able to run the latest AAA games. An advantage of a gaming PC is that you are able to upgrade it without having to sell up and start again as you would have to with a console. You also have game availability, different consoles have games that are exclusive to them only to try to persuade people into their console, for example, PS4 has a couple of games out at the minute such as God of War, and The Last of Us.

This choice is down to your personal preference, how much of a budget you have, what games you are going to be trying out, any accessories that you want, and also the graphics you want on what games. There is no right or wrong answer it is your choice, we are just here to advise you on all options

So What is a Gaming Computer?!

a quick summary, a gaming computer has higher performance compared to your regular computer that you buy in a shop as it will be running a much more demanding task than your normal computer. You will have a massive choice of upgrade options as all parts can be changed at any point. It is down to personal preference if you wanted to go down the PC or console route as there is no correct answer, it all depends on what you are looking to get out of it.

If you have any questions about this at all please leave a comment below and I will get back to you as soon as possible!