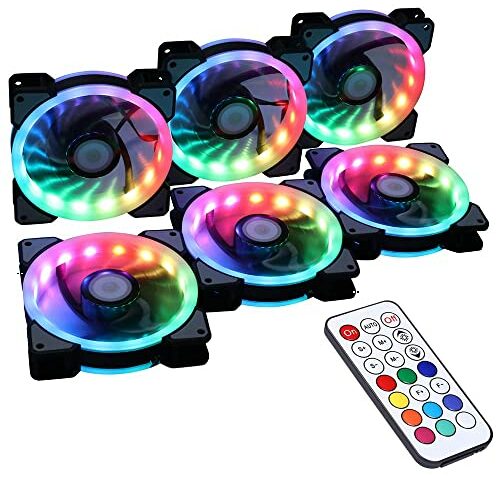 When it comes to building your own gaming computer it can start to get very expensive very fast, however, there are ways to keep the costs down. If you need some fans but can’t afford the ones you want there are cheaper alternatives that can do the job until you can get your upgrade. One of these alternatives I want to talk about is the Ubanner pack of wireless RGB case fans with controller. I personally have used these for a couple of months when I couldn’t justify the fans I wanted. These are a generic pack of 6 120mm fans. It comes with a controller that you can use to control the fans speed, RGB lighting brightness, lighting modes, lighting colours, and how fast it changes colours. There are also all the fittings that you need to fit the fans, for instance, all the screws required and a fan control box that allows you to up to 10 ARGB fans and up to 2 ARGB LED devices.

As this is a cheaper set of fans there aren’t many features to them. As we have already mentioned you get 6 120mm fans in a pack, a controller to operate the RGB lighting with a variety of colours static colours, and many modes for the RGB LED’s, along with how fast these modes change. You are able to control the fan speeds to improve the cooling of your build or slow them down if you don’t need them. You also get the “hub box” which allows you to install up to 10 ARGB fans and an additional 2 ARGB devices which gives you a large choice of setups. The fans have ultra-thin blades to reduce the noise and vibrations as much as possible and to deliver large volumes of cool airflow.

When it comes to the spec there’s not a massive list. The type of fan is an addressable RGB PC case fan that is made from ABS plastic. You will get six 120mm fans that have a ring of multi colours LED’s around the fan. The fans have speeds of 700 up to 1500 rotations per minute which give airflow of 30 CFM (cubic feet per minute). They run off of 12 volts with a current of 0.35a and run on a hydro bearing which would produce around 23.5dBA which would depend on the speed that you choose. Each fan is 120mm x 120mm x 25mm which is the average size for computer fans unless you go for the larger 140mm fan.

For the price of these fans, they are very impressive! You get everything that you need to fit them to get the fans and RGB up and running, once you have them installed they offer very good cooling and airflow for your computer, along with this they have very good-looking fans with the RGB LED’s that have been used. You don’t have to worry about installing any software or apps to use the LED’s you are able to use them as soon as the PC powers on with a very easy to use remote control. They can get noisy if you speed them up which would happen with all fans maybe not quite as noisy but it isn’t unbearable. Another good reason to consider these is the fact that you are able to install some more fans and LED devices if you wanted to as the “hub” has extra ports. I would definitely recommend these fans to anyone who is trying to keep the cost down on the computer that they are building as they are very good value for money.